The various types of coffee.

In the classification system of the vegetable kingdom created by the Swedish botanist Carlo Linneo, coffee was catalogued in the family of rubiaceae,
grouping 4500 varieties including 60 species belonging to the genus coffea.

Coffea Arabica
Species cultivated and selected for several centuries. Of this the most famous is the variety “Moka”, cultivated especially in Arabia, whose rather small grains, have an intense aromatic scent. Their characteristic colour is copper green, while the shape is flattened and elongated.
Coffea Robusta
Similar to the Arabica coffea, its branches curved in the shape of an umbrella, towards the ground. During the year the flowering is continuous. Its roundish grains are smaller, but richer in caffeine than the previous species and, once roasted, are very perfumed.
Coffea Liberica
Coming from the forests of Liberia and Côte d’Ivoire, is a beautiful long-lived plant, robust, luxuriant in the vegetation with fruits and seeds almost twice the size of those of Arabica, and also more resistant to the onslaught of parasites. Its beans, although of inferior quality, give a fragrant and pleasant coffee. With a taste that, until a few decades ago, liked most in the Scandinavian countries.
Coffea Excelsa
Discovered in 1904, this species resists well the attack of diseases and drought. It gives a very high yield and the grains, allowed to age, give a coffee with a fragrant and pleasant taste, similar to that of the Arabica coffee. 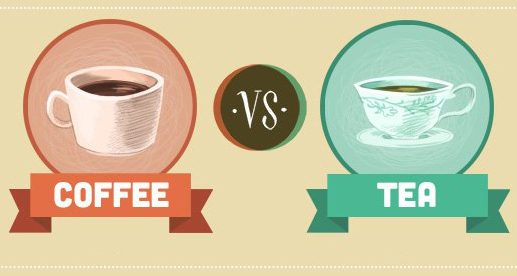 Tea vs Coffee, a morning battle : Depends on your personality